The idea of the love lock can be traced back to around a 100 years ago when the world seemed on the brink of going to war. A young couple from Serbia – a teacher called Nada and a soldier called Reija – fell in love. They would meet on a bridge in the middle of their city on a regular basis. Rejia eventually left to fight in the war and came back home in love with another woman that he had met while being stationed in Greece. He broke off his engagement with Nada, who went on to die broken-hearted. 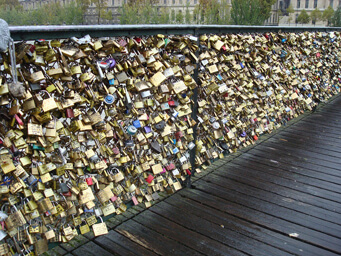 As tragic as their love story is, it did inspire the tradition of the love lock bridge. Couples in their town would confess their everlasting love and solidify it by leaving padlocks on the bridge where the young couple met and then throw the keys for the padlocks into the water.

Love locks are relatively new outside of this love story from Serbia. Love locks are considered to be a symbol of eternal love, two people connected forever by throwing the keys to the padlock into the river below. Other cities have created their own legends to go with the tradition. There is a city in Uruguay where the legend says that if people place a lock with their initials at a fountain and then return to it their love will be sealed forever.

Love locks didn’t become widespread until the early 2000s but the craze happened so fast that it didn’t take long for bridges to be covered in locks. Some bridges have even suffered structural damage because of all the locks.

A New Spin on an Old Tradition

Love locks became an instant phenomenon but government officials tend to frown upon them. The locks are known to damage the structural integrity of bridges, along with the historical preservation. The Pont de Arts in Paris, France, is the best example of this. Locks started appearing on the Pont de Arts in 2008, and it was estimated over 700,000 locks had been put on the bridge by 2014. The locks damaged the bridge and they were an eyesore for a city that is proud of its beauty. Paris civil workers took down the locks and placed solid panels that locks couldn’t be attached to.

There are some alternatives to the love lock bridge that are starting to show up, however. Love lock trees are placed alongside bridges in Moscow for people to place their locks. After a tree is filled, it is moved to somewhere people can admire it. It’s a great way to continue the romantic tradition while also preserving the integrity of bridges in the city.

How to connect your Smartphone with your door locking system

All the Information You Need to Know About Keyless Entry System

What is Lock Rekeying?

How Can We Help?